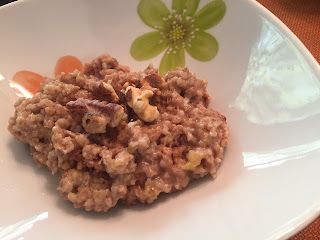 I've had a couple requests for this recipe, so I thought I'd dust off the blog for a minute and post it. I've been pretty in love with baked oatmeals for years, but for some reason I've never posted one of my recipes. Or if I have, it was so long ago, I don't remember it. Anyways, let's talk about the recipe.

This recipe is a descendant in some ways of Thug Kitchen's Quinoa Oatmeal. I like their recipes, but they always tend to leave out one step that breaks the recipe. For this one, it's cooking the oats and quinoa in water instead of the milk. That just gives you bland, flavorless oatmeal. Cook in the milk instead of adding it later. Gah.  The other issue with stovetop oatmeal is you have to stand there and stir it or it sticks to the pan. It's kind of a pain. That's honestly why I like baked oatmeals. It's so very low maintenance. The other key to this recipe is toasting the oats before cooking. Every time I try to skip this step, I dislike the results. I'll frequently do this step the night before and even assemble the whole thing before I go to bed, just so I can be lazier in the morning.


In a small pan, heat up the oil. Toast the oats in the oil until fragrant. Combine oats, coconut milk, cinnamon, ginger, nutmeg, salt, and bananas. If you are adding quinoa, you may need an extra half cup of water. I think mine is plenty sweet without the extra sugar, but if you want to add some brown sugar, go far it. Combine everything well in a casserole dish with a lid and bake at 350 degrees for about an hour, or until all the liquid is absorbed. Top with walnuts, which can also be toasted.

I'm fuzzy on the exact time in the oven because I usually go back to bed while it's cooking. Hey, mornings are cold and husbands are warm.
Posted by Jennifer Liang at 8:33 AM

I have been visiting your recipe blog from past 3 months. The way of recipe tips looks to be easy for all readers. I would personally recommend our blog visitors to subscribe to obtain useful posts like this periodically. Particularly post on "Vegan Baked Banana Bread Oatmeal" is awesome. Get in touch with us via our websites Vegetarian restaurant | Sweet Shop